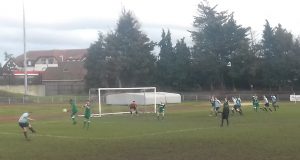 Hosts FCR remain top by a point after they netted five second half goals to see of Hullbridge Sports at Theobalds Lane.  A goalless first period saw both teams put in a good display and also create chances and the game looked in the balance, however once the hosts netted from a free-kick in the 56th minute, they never looked back, and doubled their advantage in the 63rd minute with a very well worked goal and confident finish.  And in the 73rd minute it was three when a pass beyond the visitors defence saw another decent finish, and just three minutes later it was four as the hosts were now running riot.  And with eight minutes to go another free-kick found the net and completed a terrific afternoon for the league leaders, as for Hullbridge they fourth bottom and two points behind Waltham Forest just above them.

Billy Johnson netted twice in the second period to help Rovers to all three points and stay in second spot, just one point behind leaders FCR, after defeating Waltham Forest at Burroughs Park.  The hosts went ahead midway through the half after Jay Nash slid home an effort in off the post, however the visitors levelled midway through the second period when Da Silva pounced on a defensive mix up, and looked to have punished the hosts wastefulness in front of goal up to this point.  But with just under twenty minutes remaining Johnson tapped home to restore the home sides lead, and then sealed the points with four minutes remaining with a lovely finish from Johnson, meaning Forest remain fifth bottom, just two points above the bottom four.

Hosts West Essex remain 9th, and are just a point behind Tower Hamlets in 8th, after Michael Mignot’s 84th minute goal saw the hosts defeat Hamlets at Mayesbrook Park.  The winning moment came when a terrific through ball from Brad Russell found Mignot, and the hosts attacker poked home to see his side grab all three points.

Waltham Abbey Res. were chasing four pieces of silverware going into this one; and they went into a 1-0 half time lead thanks to Reece Mosanya opening the scoring in the 26th minute. Jose Espinoza levelled up four minutes into the second half and then Buckhurst Hill ended Waltham Abbey’s run by scoring twice in the final five minutes as goals from Nathan Sollosi and Steven Townsend gunned down the hosts. Either Old Southendian or Catholic United will provide the opposition in the Final.