ITV’s The Voice: Stanford songstress Ruti makes it through to next round

STANFORD singer Ruti Olajugbagbe has made it through the sing off and into the next round of The Voice. 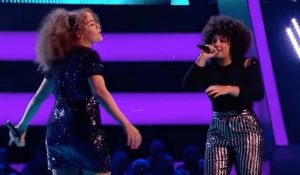 The teenage singer appeared on ITV on Saturday night in a sing off with Saskia Eng. They duetted on Dogs Days Are Over.

Ruti ince again showed what a wonderfully melliflous voice she has. We are biased but Ruti’s voice would not be out of place in any music scene over the last five decades.

Deciding judge Tom Jones decided that Ruti was the better singer but in the end, both singers went through after being highly praised by all four judges.

Tom Jones said: “You nailed it!”