Stride On 2018 is coming to the Thameside Theatre

STRIDE ON 2018 is going to be their 51st show, and will be coming to Grays from 25th to 28th April 2018 and promises to be yet another great show. Scouts and Guides from across Thurrock have been rehearsing every Sunday since early October to make it a great night of entertainment.

The Show’s Director Jan Thurnell, who is officially the longest serving Gang Show Director in the world, said: “Gang Show is a great opportunity for the youngsters to perform in front of a live audience, which they do with a high degree of professionalism, doing both themselves and their leaders proud”.

This year’s cast of around 60 members aged nine years and over are supported by a similar number behind the scenes. The show contains a good mixture of glamorous traditional and modern musical numbers carefully entwined with some comedy sketches, giving a nice balance of humour, whilst retaining a traditional core of Ralph Reader elements. Reader was the actor, theatrical producer and songwriter who is best known for starting the Gang Show tradition in 1931.

The show runs nightly, starting at 7.15 pm, with an additional matinee performance on the Saturday, which commences at 2.15 pm. 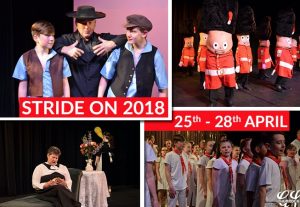