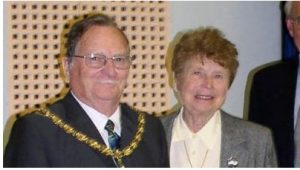 FORMER Thurrock Mayor and controversial councillor Ian Harrison has died after a short battle against illness.

He was a long serving Conservative but quit the party in 2010 and formed the ‘Concerned Conservatives’ group with former council leader and mayor Anne Cheale and Stuart St Clair-Haslam.

After then Tory council leader Garry Hague failed to resign after a vote of no confidence Cllrs Harrison, St Clair-Haslam and Cheale voted with Labour in a move that enabled Labour to take control of the council.

Mr Harrison served as a councillor from 2000 to 2011, initially in Chafford Hundred then Corringham & Fobbing, where he lived on Recreation Avenue.

Mr Harrison’s wife, Daphne Hart, was also a councillor – serving on Essex County Council – and in 1979 she founded the Holiday Homes for the handicapped charity, renamed in in her honour after her death in 2011.

The charity, which Mr Harrison served as a trustee, continues today and still has a shop in Chadwell St Mary.

The couple’s grandson Richard Bingley said Mr Harrison retained fond memories and connections with Thurrock right up to his death and in a message to former councillor colleages of Mr Harrison he said: “I know that he was really proud and privileged to have worked with all of you and your groups, being the ‘practical’ and ‘no-nonsense’councillor that he was!

“He was absolutely selfless and a total rock for so many people. He didn’t do ‘small talk’ and, for that reason, when he did say something everybody literally sat up and listened!”

“Ian also thought the world of many council staff and kept in contact with many councillors and staff after his retirement.

“Ian was also a devoted husband, father, grandfather and great grandfather. But somehow he found the time to help so many local people through being an exceptional councillor and charity worker.”

Funeral details have yet to be announced.