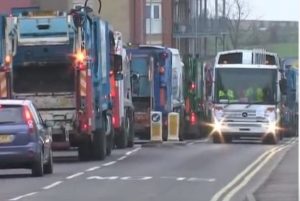 WORKERS employed in Thurrock Council’s waste collection service are set to begin strike action on Thursday, 12 April with their union slamming the authority for its ‘rubbish management’.

The 65 workers who are members of the Unite union, say they have been forced to resort to strike action, after management refused to listen to their concerns.

The workforce says its greatest concern involves the council’s insistence that it will install what the union calls ‘big brother style’ cameras on all refuse lorries. The cameras will livestream 360 degree pictures directly to the manager’s desk.

A union spokesperson says: “The cameras will be able to spy on workers and residents; they will be able to monitor what residents place in their bins and can be used as evidence to block collections to certain homes.”

The workforce is also striking over what it describes as the “general chaos” the service has fallen into, which, it says, is resulting in some crews being instructed to mix all the rubbish together, despite residents being told to carefully separate their recycling.

A statement from the union says: “The management’s blitz style sweeper and refuse system, which was introduced in May 2017, and operated in some areas, where all vehicles arrive at once, is a further major cause for concern. The system is resulting in workers and residents being subjected to severe noise pollution and also causes major access problems for road users.

“Thurrock’s management have repeatedly abused their position to illegally monitor workers and have regularly victimised workers, for example by falsely telling them they were in trouble with the police.”

Unite regional officer Michelle Cook added: “Strike action has been called because quite frankly the council’s management is rubbish and they have not been prepared to listen to the genuine deep-seated concerns of the workforce.

“There is absolutely no need for live cameras. This is not Celebrity Love Island these are people’s homes. Management should stop trying to recreate the Truman Show and instead concentrate on rebuilding the performance of the refuse service and improving staff morale.

“Sadly, the strike action is inevitably going to cause disruption to Thurrock residents and workers are only taking action as a very last resort because of the council’s attitude.

“It is not too late for strike action to be averted. Management need to acknowledge the error of their ways and drop the plans for the big brother cameras and then sit down to resolve our concerns.”

Unite has launched a petition for local residents to show their support for the campaign which can be located at: https://www.change.org/p/thurrock-councillors-thurrock-residents-your-refuse-collection-is rubbish

“Thurrock Council has been in ongoing talks with Unite for some months to resolve their issues. Since Unite declared a formal dispute we have worked to find joint solutions and understood the majority of issues had been resolved.

“Given this progress we were surprised to be notified this morning that Unite are proceeding with industrial action, which is disappointing for both our staff and residents.”