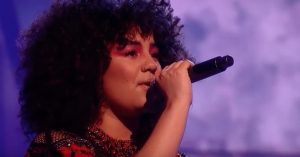 STAFF at Gable Hall school in Corringham have praised their star pupil, Ruti, after she won ITV’s The Voice.

Ruth “Ruti” Olajugbagbe, 18 who lives in Corringham, proudly brought the title home as she belted her soon to be debut single ‘Dreams; as mentor and coach, Sir Tom Jones proudly watched teary-eyed during the final.

Each contestant is sponsored by a celebrity from the beginning of the show with Sir Tom Jones spotting Ruti’s talent immediately.

Described as ‘genuine’, ‘very grounded’ and repeatedly as ‘a breath of fresh air’ Ruth – known as Ruti – said: “I knew from the age of 14 that singing was what I wanted to do with my life.”

“We always knew that Ruti had something special, having that rare combination of intellect, talent and humility. She is so kind, driven and level headed.” said Ms Sue Weston, Director of Ortu 6th Form Centre – Stanford & Corringham.

“Her voice blows you over. We are so very proud of her”, said Mr Clive Stokes, Headteacher of Ortu Gable Hall School.

Her win opens the doors of fame to yet another of Thurrock’s children and puts Ortu Gable Hall School firmly on the Performing Arts map nationally.

With a guaranteed music contract, a streamed single and several gigs lined up as immediate spin offs of her win, the future is very bright for Ruti.

The whole community of Stanford and Corringham, Ortu Gable Hall, the whole of the Ortu Federation, and of course family and friends have been steadfast in their support throughout filming.

“This is truly fantastic news. Great for the school and great for Thurrock” said Mr Rory Patterson, Thurrock Council’s Director of Children Services.