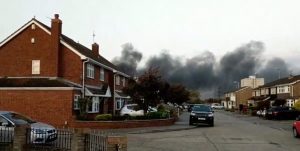 A NUMBER of leading politicians have demanded answers from Thurrock Council over a series of fires in Blackshots.

The skies across Blackshots, Grays and other parts of Thurrock were covered by black smoke for three days over the Bank Holiday period due to a large set of tyres set alight in a field north of Blackshots.

On the hottest day of the year, residents were forced to stay indoors and keep their windows closed as the billowing black smoke enveloped the area.

He said: “We are always hearing about the council collecting enough rubbish to fill Hyde Park three or four times but when an Olympic-sized swimming pool’s worth of tyres are dumped and set alight, they are absolutely silent.

“Whether it is on public or private land, they need to let residents know what they are doing.

Thurrokc Independent councillor, Luke Spillman has echoed cllr Kent’s concerns. He said: “These appalling incidents have clearly put the the health of local residents at risk. Therefore it is important that the council clarify who owns the land that these fires occurred upon and why immediate action was not taken to remove the source of the risk?

“At the last full council the Thurrock Independents proposed and successfully secured a motion to conduct a full and wide-ranging environmental review of the borough.

“Despite changes in policy, many areas in the borough increasing appear more akin to landfill sites than residential and green belt areas. Rubbish isn’t being collected, we have become a prime location for fly tipping and have truly appalling air quality.

“This is not the time for political point scoring. We need to reach a consensus on a radical new plan of action and we need to be unwavering in its implementation.”

YT contacted Thurrock Council on Tuesday afternoon with a series of questions but have yet (Thursday afternoon) to receive a reply.