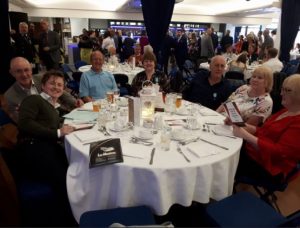 THURROCK Courts Players have just returned from a successful afternoon at the annual NODA (National Operatic and Dramatic Association) awards ceremony in Cambridgeshire.

They are pleased to announce that “One Man Two Guvnors” won the best drama category and the best overall production in region 10 (south east of England) against every other group. This includes musical groups, youth groups & pantomime groups.

A spokesperson said “We were also very proud of our member Luke Coldham for his adult pantomime “The Only Way is Dick” which received nominations for best panto and best script.

“After the 2016 success of winning best production for “The Vicar of Dibley” we could not imagine our chances at bagging another winner so soon but we have indeed and so full credit goes to Director Eric James & all the cast & crew of “One man two guvors” who made the show a success!”