Grays Athletic girls raise over a thousand pounds for charity 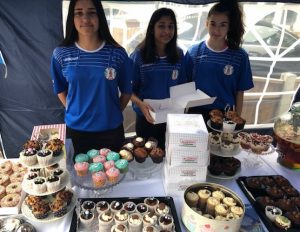 REPRESENTATIVES from Grays Athletic girls under 14 and 15 teams held a cake sale at Little Thurrock Post Office on Saturday 2nd June with all proceeds going to the SANDS (Still Births And Neonatal Deaths) charity, a magnificent total of £1176 was raised on the day.

Gurjit Thandi and her friend Tracy are the driving force behind the fundraising for this worthy cause held outside the Post Office courtesy of Jim Thandi.

The girls teams are just part of the new youth set up this season which sees 25 teams wearing the Grays colours, plus the First team, Reserves, Veterans and three Walking Football teams.

The club are proud to be able to provide football for under nine years to 75 years and above in its quest to become a true community club.