SIXTEEN young women from four Ormiston Academies Trust (OAT) academies across the country set sail alongside six female business leaders on two voyages, as part of a unique project to inspire and engage the next generation of female leaders. 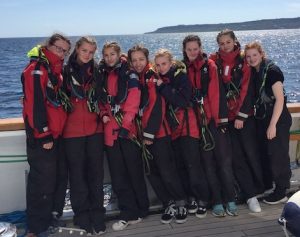 The project, Leading Lights, is a brand-new initiative run by national charity Ormiston Trust, in conjunction with Trinity House, the Association of Sail Training Organisations (ASTO), and the Honourable Company of Master Mariners (HCMM).

Two voyages took place across May led by the wonderful Ocean Youth Trust South crew including volunteers. The first team was made up of four students from Cowes Enterprise College on the Isle of Wight and four students from City of Norwich School. The business leaders included; Penny Scott-Bayfield, Finance Director at Conde Nast Britain, Kate Oliver, Chief Executive of John Hayes, and Kristeen Keith, Business Operations and Systems Director at Glaxo-Smith Kline (GSK). The students and business leaders embarked on a five-day sailing adventure out of Poole harbour to Dartmouth and back to Poole, aboard the beautiful training vessel ‘Prolific’.

Both students and professionals alike – many of which had never sailed before – were actively involved in every aspect of sailing the boat, from hoisting and lowering sails, steering, getting involved with navigation, anchoring, cooking and keeping watch. Alongside sailing activities, the female executives spent time chatting with and mentoring the students, talking to them about their careers, providing advice, opening-up networks and helping to build students’ confidence.

The once-in-a-lifetime opportunity, which was made possible by Ormiston Trust and its invaluable partners, aimed to support and inspire the next generation and to help young women on their path to becoming leaders in their chosen fields. Ormiston Trust is a grant giving body which aims to improve the life chances of young people and families.
To get support the programme, get involved and to find out more, please visit www.leadinglightsproject.co.uk or call 0207 266 7940.

Ormiston Trust Trustee Steve MacLeod stated:
“Ormiston Trust aims to improve the life-chances of children and young people, both through our support for Ormiston Academies Trust schools, but also through our direct charitable endeavours. The Leading Lights programme provides a unique and inspiring opportunity to raise aspirations and broaden horizons for young women, whilst also providing outstanding opportunities for the business leaders. We are delighted that both trips were so successful and have been so pleased to hear of the friendships and experiences that have been created. We already look forward to next year!”

Miss Frances Anderson, who accompanied the City of Norwich School students on the trip, commented:
“Alongside learning and developing their sailing skills, the girls had the opportunity to talk to the business leaders about their path in life and the challenges they have faced and used these conversations to plan the next steps they would take after the voyage. Students and mentors alike spoke of their increased confidence and how supported and empowered they felt by each other.

“Leading Lights is a brilliant project which will surely continue to inspire many more women of all ages for years to come”.

Les Chapman, Warden and Trustee of the Honourable Company of Master Mariners and Younger Brother and Chairman of the Southeast Grants Committee for Trinity House commented:

“I am so pleased that our support of the Ormiston Trust initiative has been so successful in its launch and initial cruises of the Leading Lights programme and I look forward to many years supporting such a worthwhile project.”