The Tilbury Docker is coming

ON FRIDAY, there will be major celebrations at the port of Tilbury to mark the 70th anniversary of the Windrush. 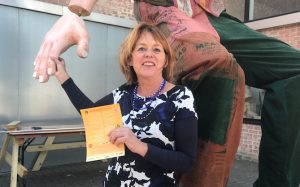 As part of the event, a magnificent puppet called the Tilbury Docker has been made by the Kinetika team who are based at the High House Production Park in Purfleet.

We went down to interview artistic director, Ali Pretty.