TWO women pioneers who helped to establish Thurrock’s women’s refuge have contributed to a Heritage Lottery funded project telling the story of the refuge movement in Essex. 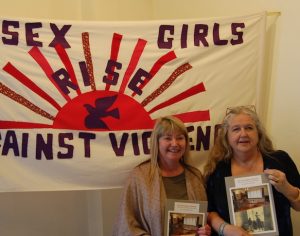 Lee Eggleston was just 14-years-old when she joined Thurrock Women’s Action Group – and was still a teenager when she had to explain to her mum why the family’s phone bills were so high, because she was running a helpline.

Sheila Coates became involved in women’s campaigns after joining Thurrock CND, and became a volunteer at the refuge which opened in 1981.

Their stories have been recorded as part of the oral history project which documents the founding of the refuges in Essex and East Anglia.

Lee, now 53, worked with the group of committed women who established the refuge and Thurrock Rape Crisis Centre. She explained: “We were fearless. Through talking to each other, we identified the issues around domestic and sexual violence.

“A group of us decided to join a demonstration in London. Going to London was a big day out for us and we dressed in our finery and painted our nails – we weren’t exactly given a warm reception by some of the activists in Doc Martens and dungarees.”

Sheila, now 63, described the early days at the refuge: “The refuge was in a terraced house and we were full all the time. Women were sleeping four to a room, and sleeping in the living room, and there were a lot of children too.

“The level of violence they had experienced was often distressing. Sometimes we had situations with violent men climbing up the drainpipes trying to get in.”

Both Sheila and Lee received honours for their services to women in Thurrock, Lee being awarded an OBE and Sheila and MBE.

Their stories feature in a fascinating exhibition at the Minorities in Colchester, opened by Colchester MP Will Quince on 17 June, which highlights the tenacious grass-roots campaigners who fought against the dismissive attitudes of the 1970s and 1980s to lift the lid on domestic violence.

The free exhibition, “You Can’t Beat a Woman,” runs from 19 to 30 June. It is accompanied by an illustrated booklet, a workshop and a free talk.

Dr June Freeman, who co-ordinated the project, explained: “Many of the pioneers of the refuge movement are now in their 60s and 70s, with some in their 80s. If we were to capture the story of the early days of the refuge campaign from the point of view of the women who instigated and were involved in it, we needed to act immediately.”
June added: “Refuges are now an accepted feature of the social landscape. The dismissive condescension of the 1970s belongs to a bygone age.

“But, with many refuges heavily dependent on central and local government funding, government policies threaten both the stability and culture of refuges, which were established as organisations run by women for women.”

The project covers eight refuges in East Anglia which opened between 1974 and 1981 and a refuge for Asian women in Newham, East London.