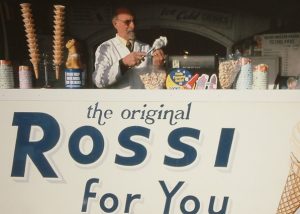 Who wants to be beside the seaside?

A legendary ice cream parlour on the Southend seafront has signed up for a site at intu Lakeside that could help transform the local institution into a national brand.
intu Lakeside has agreed terms with Rossi Ice Creams to launch at the popular shopping and leisure destination this summer, 86 years after Rossi’s Southend parlour first opened its doors to the public in 1932. The company now sells ice cream in selected branches of ASDA, Morrisons and Co-op and hopes the increasing brand awareness from an intu Lakeside store will support plans to distribute its product nationally.

The new arrival will tap into a growing interest in local provenance and cause a ripple of excitement among intu Lakeside’s catchment of affluent Essex shoppers who have grown up enjoying mouthwatering Rossi ices as part of their days out at the seaside.

Rebecca Ryman, regional managing director at intu, said: “There’s never been more choice in the food and the drink sector and the best brands are tapping into trends that really matter for today’s consumers such as local provenance. Rossi is a real Essex seaside institution and its arrival at intu Lakeside is going to generate a huge amount of excitement among so many of our shoppers who already love this well-known local company.

“intu Lakeside’s fantastic and growing retail and leisure offer includes brands like Nickelodeon that will draw customers from across the country and this will provide Rossi with nationwide attention and the opportunity to gather even more fans of its delicious range of ice creams.”

Charlie Bird, sales director at Rossi, said: “Our opening at intu Lakeside is a key part of our strategy to build the profile of Rossi nationally. Whether they’ve grown up loving Rossi ice cream or encountering us for the first time, we can’t wait to make more customers smile at our intu Lakeside site.”
Rossi sits next to artisan baked donut brand, Dum Dum Donut’s an independent British company based in Chelmsford, Essex who offer high quality, natural artisan doughnuts that are uniquely baked fresh every day.

Jack Wills will also open at the centre this year, opposite a new Zara store which will be three times as big as its current intu Lakeside shop.
And incoming leisure brands like Nickelodeon, Hollywood Bowl and new mini-golf operator Puttshack will arrive at intu Lakeside in 2019 as part of the centre’s £75 million development.