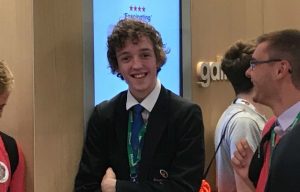 STAFF and students from Ormiston Park Academy in Aveley are celebrating after one of their students – Oliver Hackett – made it through to the Microsoft Office Specialist (MOS) Four Nations final, which took place last week, having won the title of National Champion for England qualify earlier in the year. In total, there were approximately 50,000 UK entries into the Four Nations final this year.

The Four Nations final saw Champions from England, Ireland, Scotland, and Wales compete for a chance to represent the UK and Ireland at the MOS World Championship in Florida this year.

In 2017, the MOS World Championship attracted more than 560,000 unique candidates from 122 countries.

“This is such a fantastic achievement – we’re all so proud of Oliver!

“It’s amazing that our academy continues to do so well in this huge competition every year – it is testament to the hard work and determination of our students who take part.”