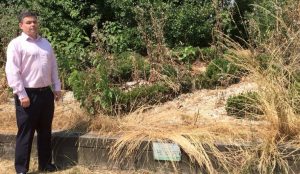 IN 2009, a plaque with the five Olympic rings, marking the fact that the Olympic Games were coming to London, was laid in Blackshots Park close to the Daneholes roundabout.

It was said to symbolise a commitment to sport in the borough.
But after a debate in Thurrock Council last week, where a number of politicians questioned the council’s commitment to sport and criticised their lack of ambition, Labour’s prospective parliamentary candidate, Cllr John Kent, went up to the park to see what the rings looked like.

During the meeting, cllr Kent spoke and said that a lot of sports organisations in Thurrock felt “unloved”.

What cllr Kent found, shocked him, as the rings had been left to rot, covered in wild grass.

Cllr Kent said: “It is sad to see that they have been allowed to lapse into such a dilapidated state. I have raised it with the council.”

The motion regarding sport was submitted by the deputy leader of the Thurrock Independents, cllr Jack Duffin.

When he heard about the state of the rings, he was shocked.

Cllr Duffin said: “The 2012 Olympic Garden in Thurrock appears to represent how many feel sport is being treated by Thurrock Council: neglected, ignored and given up on.

“It is time Thurrock Council actively engaged with Thurrock’s sports teams and clubs.

“We should do everything we can to encourage participation and engagement.

“We have many fantastic teams and clubs in this borough and it is about trim they were given the support they deserve”.

Below is a picture of how the rings looked in 2012.

YT contacted Thurrock Council and invited them to respond. They have failed to do so by time of publication.

Below is a film of the council debate on sport.

From the archive: The day the Olympic baton relay came to Grays.

One Response to "Left to rot?: Thurrock’s Olympic legacy “disgrace”"