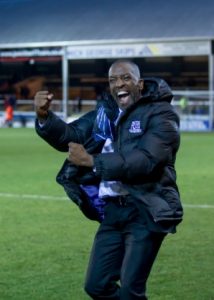 LIKE your football? Join Essex Chamber of Commerce for a great South Essex networking event and a chance to ask Southend United’s Manager Chris Powell what his plans and aspirations are for the forth-coming season. There will also be a chance to network after the presentation.

Chris Powell made 290 appearances for Southend during a six-year stint at Roots Hall in his playing career which saw him become an England international.

The 48-year-old would go on to play for Derby County, Charlton Athletic, West Ham United, Watford and Leicester City. Towards the end of his playing career, Powell served as Chairman of the Professional Footballers’ Association for five years from 2005 until his retirement as a player in 2010.

Powell’s career in management began in January 2011 back at The Valley with Charlton. In his first full season in charge in 2011/12 he masterminded the Addicks to the League One title and his achievement with Charlton saw him pick up the LMA League One Manager of the Year award. The following season Powell led Charlton to a ninth-place finish in what was the club’s first season back in the Championship since 2008/09.

His next job came at Championship side Huddersfield Town in September 2014 where he steered the Terriers to safety before going on to take the reins at Derby County in September 2016 on a temporary basis.

He returned to Blues in January as boss and make a great start to life in charge, securing two wins in his first two games.