Over 4,000 homes planned on Thurrock’s border 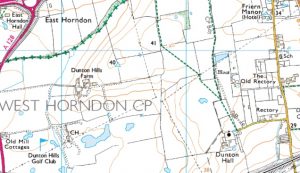 PLANS have been unveiled for a huge garden village development for as many as 4,000 homes in land south of the A127.

The proposed development on land encompassing the Dunton Hills Golf Course and Dunton Hills Farm also includes plans for a an all through school and second primary school, as well as around 2,500 square metres of non-residential floorspace for restaurants, offices and shops.

Owners of the land have set out their plans in a scoping report – the first stage of a planning process that forms a basis for moving into the development stage of the planning process by engaging stakeholders to include the likes of Brentwood Borough Council and neighbouring councils, the Environment Agency, Highways England, Network Rail and water and power companies.

A Dunton Hills Garden Village, on land to the south of the A127 and east of the A128 between Basildon and Brentwood boroughs, is set to be a major plank of Brentwood’s Local Plan.

This is yet to be formalised but has earmarked the land for 2,500 homes which could grow to 4,000.

Brentwood Council, which has been asked to earmark land for 7,600 homes for development between 2013 and 2033, has yet to respond to Basildon Council’s concerns that the land there is unsuitable for large-scale house building.

The leader of Basildon District Council, Andy Baggott, said: “It is very much what developers are doing with our local plan. To be honest I think it is shoddy.

“To me it is some developers pushing the envelope with regard to how far they think they can get things to go.”

In order to facilitate the proposed development, existing buildings related to the golf course would be demolished, as well as the wind turbine and associated sub-station.

Subject to further detailed assessment, access to the proposed development would be from two entrances on the A128.

Delivery would be phased over 20 years.

Cllr Baggott added: “It’s quite clear that Brentwood want to develop right up to the borders, it’s equally clear that it’s us with the infrastructure cost.

“We can either see how we can negotiate with Brentwood which might mean some houses there but then we get the infrastructure or we send them a stiff letter saying how disappointed we are.

“Those are the two options that I see it, but other people might have other options they might want to suggest they can be brought to be table.”