Parking restrictions to be imposed in Stanford-le-Hope 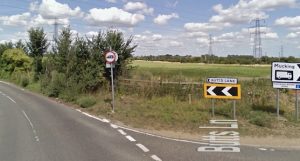 THURROCK Council will implement parking restrictions at the site of a new housing development after rejecting an objection from a resident.

The parking restriction near to the Butts Lane Development in Stanford Le Hope was linked to the planning agreement in order to prevent congestion at nearby junctions.

A statutory consultation was carried out in May but received an objection from a resident who felt the restriction would make the area look untidy and would be unnecessary.

The objection was refused by the council on Monday because the parking proposal is centred around a safety issue. The council also noted that due to the restriction being tied into the planning application the developer will be responsible for the cost.

The Butts Lane Development will bring 350 homes to land once occupied by the St Clere’s Golf Course.

It received outline planning permission from the former Secretary of State for Communities and Local Government, Eric Pickles, in March 2012.

The original planning application was approved by Thurrock Thames Gateway Development in February 2011 but an inquiry was held after Mr Pickles raised concerns over potential conflicts with national policies.

It also attracted fierce opposition from residents who formed an action group and collected more than 2,000 signatures on a petition.