A CANCER patient from Thurrock who lost most of his penis to a flesh-eating superbug has won a six-figure payout. 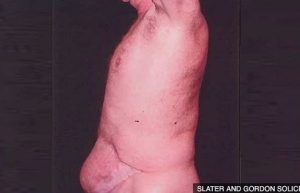 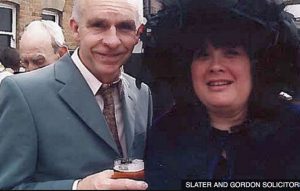 His bowel was punctured during the routine operation at Southend hospital but staff only noticed six days later.
Southend University Hospital NHS Foundation Trust admitted there were “failures” in diagnosing the problem.

Mr Lane, from Thurrock, said: “They’ve admitted their mistake, but I’ve not had an apology and knowing that just a scan a few days earlier would have prevented all of this is very difficult to accept.”
Following the life-changing operation, Mr Lane can no longer have sex, is incontinent and has been treated for depression.

The damage caused by the infection was so severe that he was left with just an inch-and-a-half of his penis.

He was also forced to have the contaminated tissue covering his stomach removed, which has left him looking “nine months pregnant”.

Mr Lane, who married his long-term partner Sue shortly after being discharged from hospital, decided to speak out to warn people how dangerous the necrotising fasciitis bug is.

He said: “I’ve been compensated, but I’ll never get my health back.

“I used to be sporty and proud of my body, but now I can’t bear to look in the mirror.”

Mr Lane, who works as a carer, added: “My wife and I have been together for 18 years and enjoyed a healthy sex life but since this happened, that has been impossible.

“The desire is still there, but the little that’s left just doesn’t function any more.

“I know Sue still loves me, but I feel less of a man.”

Denise Townsend, director of nursing at Southend University Hospital, said: “I can confirm that the trust is in communication with Mr Lane regarding his case, a settlement sum has been agreed and that the trust has admitted failures in relation to delays in Mr Lane’s diagnosis.”