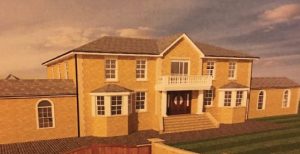 TV celebrity, nightclub owner and property developer Mick Norcross has been given the green light by Thurrock planning councillors to create a rural manor house in the borough, even though it is in the green belt and council officers recommended rejection.

His new building was described a landmark one by one councillor who suggests it could be the turning point that brings ‘the captains of industry to Thurrock – and he even suggested Thurrock Council chief executive Lyn Carpenter should up sticks and move into a similar home in the borough.

Mr Norcross, who operates the Sugar Hut nightclub in Brentwood and came to national attention for his part in the early TOWIE TV series, submitted a plan to turn a collection of farm and outbuildings on a site in Bulphan into a large new building.

Under planning rules, he could have converted the barns and building without contravening green belt legislation – and actually created a bigger build than the one now set to happen – but he applied for the manor house instead.

At a meeting of Thurrock Council’s planning committee on Thursday evening (13 September) planning officers recommended rejected the application because it was in breach of their green belt regulations, but councillors overwhelming supported the bid.

The vanguard of supporters for the project at Manor House Farm on Brentwood Road was Cllr Gerard Rice, who said he took his cue from the fact that no-one had objected to the scheme locally.

He told the meeting: “We want to be encouraging this. We are talking about a manor house on a farm which normally is a very large building. While we need to exercise caution we should allow this, perhaps taking away the existing permitted development rights so once it is built, that is it. There isn’t any opportunity for urban sprawl.

“There are already tall buildings on the site so there is no argument the new building will impinge on the openness of the site. It’s a manor house, befitting a farm. What they are planning to do looks quite tasteful; what they could do, under permitted development would look a mess.

“This sort of development should be welcomed.

“We look towards the captains of industry to remain in our borough. When you have a house like this the occupiers must have a considerable income and you want those people in the borough

“This project creates the right impression. May I be flippant? We may even encourage our chief executive to buy a home in the borough of this stature.”

Committee chairman Cllr Tom Kelly backed up Cllr Rice’s argument and drew comparison with neighbouring councils where development was welcomed, saying: “Initially it does look open and shut in terms of whether we would normally allow it. I understand the recommendations for refusal but I think having looked at the area extensively I am not sure I agree with the idea this would result in loss of openness to the greenbelt.

“There are two industrial sites in the local area and a housing development. In terms of the loss of green belt and openness it’s not something I agree with. We have to be careful in the green belt but in this case I find it difficult to accept refusal.

“We need to be quite diverse in terms of these larger homes, we need to be diverse in our range. Rainham and Hornchurch are very affluent but Thurrock’s not good at attracting executive homes, although we have made some progress recently.

“It is really the fields people associate with green belt, not so much sites like this and I think weight needs to be added that no one has objected.

“We need to support developers who respect us and ask us permission.”

Cllr Terry Piccolo said: “I find it hard to understand they could be allowed to build something that would have a bigger and more unsightly impact than this application which is a smaller impact on the greenbelt” while Cllr Colin Churchman added: “I think this looks pleasing and I intend to vote for it.”

In the end councillors unanimously voted to support the scheme, but under planning rules – as it was a vote against an officer recommendation – officers have to have the opportunity to reconsider the application and redraft their recommendation, bringing the application back to the next planning meeting, when its approval should be formally rubber-stamped unless officers can find good reason for it not to be.