Blues arrested their recent run of defeats thanks to a 46th-minute strike from Michael Mignot playing his first full game since joining in the close season. The scoreline somewhat flattered Brentwood, who failed to spark during the ninety minutes. Had Blues converted the plethora of chances created, the goal tally would have looked so much different, however, the three points gained will help to restore confidence in the squad as they look to climb up the league table. 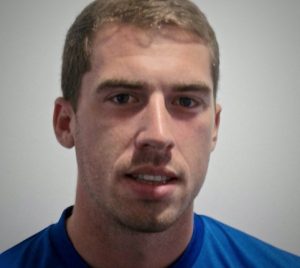 From the first whistle Blues made their intentions clear, inside the opening minute winning a corner, but unfortunately, the delivery lacked precision and the ball sailed harmlessly out. In recent weeks Blues have made similar quick starts but then have eased off the throttle allowing opponents to wrestle the initiative and go on to claim victory. Against Brentwood they maintained a high tempo throughout the ninety minutes. They soon tested Rob Budd in the home goal, when Shomari Barnwell tried his luck from the edge of the box.

The early stages saw Mignot and Aron Gordon enjoy success out wide, gliding past defenders with ease and sending in a series of crosses, but Blues failed to make a breakthrough. Brentwood – despite being under pressure – could have gone in front, only to be denied by Lloyd Anderson, who plunged to his left to push away a well-struck free kick. A flurry of activity saw another chance fall to Brentwood’s Quba Gordon, but he wasted the chance, nodding over.

Mitchel Hahn’s long throws – although causing problems – could have been used to greater effect if Blues’ players had peeled off to the far post, waiting for a flick on, but too many times the near post became congested, with the ball being flicked on but with nobody to take advantage. The more chances Blues created and failed to take advantage of, the more you felt that Brentwood would punish them with one of their quick breaks. They so nearly stole the lead when a free kick flashed across the Blues’ box and out of play.

Another Blues’ raid brought the half to a close when a forceful run from Callum Thompson saw him feed Barnwell, who unleashed a crisp drive beating Budd and the far post.

After all the near misses in the first period, Blues struck within a minute of the restart. Barnwell nodded the ball to sub Adeyinka Cole and with a deft touch he helped the ball on to Mignot, who rifled the ball past Budd to record his first league goal in Blues’ colours. It was just reward for his hard-working first half display and ignited a period of intense pressure on the home goal. Mignot came close to his second, when he just failed to make good contact in the box and the ball was scrambled away.

Cole – introduced at halftime – looked hungry for the ball, unlike previous weeks when he seemed a shadow of the player from last season. He linked the play well, combining with Hahn and Stanley Muguo to drive Blues forward. Brentwood were finding it hard to stem the tide in front of them. Cole should have done better when a nimble run into the box saw him flick the ball into Budd’s hand when a pass to a well-placed colleague was the better option.

Mignot was proving a real handful for the hosts. Buoyed by his goal he looked full of running, providing a chance for sub Dennis Oli with a great ball into the box which just evaded the head of the onrushing striker. The ball fell to Gordon and his drive was deflected behind.

Blues continued to push forward but could not find that elusive second goal to put clear daylight between the sides and that was mainly down to Budd. He did well to push out a fierce Cole strike and then denied Oli getting a hand to the strikers cross-shot.

Brentwood – still in the game at 1-0 – started to ask questions of Blues defenders. A great run and cross from Kojo Apenteng failed to meet a teammate. Jack Gardner sent in a speculative drive from 35 yards drifting over. Anderson was then called into real action for the first time in the half when he rose through a ruck of players to punch the ball clear of danger.

Blues reasserted their authority and really should have wrapped the game up when Cole broke free and with only Budd to beat he somehow missed the target from close range, sliding the ball wide of the upright. Minutes later he stung Budd’s hand with a piledriver, which the keeper did well to push away.

A late flurry from Brentwood failed to produce any openings and Blues held on to record a deserved win and hopefully kick-start their season.