THURROCK MP, Jackie Doyle-Price has incurred the wrath of Brexiteers after a comment she made on social media.

Ms Doyle-Price was reacting to comments to a tweet from MP for Morley and Outwood, Andrea Jenkyns (Cons) who was responding to the Prime Minister, Theresa May’s speech in Downing Street on Friday afternoon.

Ms Doyle-Price duly responded: “Give it a rest Andrea”

Ms Jenkyns replied: “I will continue to fight to honour the result of the UK’s biggest democratic vote in history. I am also fighting to deliver what the majority of my constituents voted for. How did your constituents vote Minister?”

Jackie Doyle-Price retorted: “I’m doing the same. The EU put two fingers up to chequers this week. No need for you to join in behind them”. 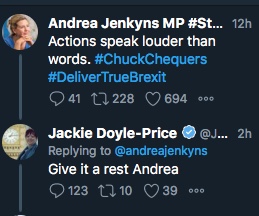 Among the comments were:

“Jackie Doyle-Price, your constituents voted 72% vote to Leave the EU in Thurrock. Why don’t you resign and give your seat to an MP that actually represents the constituents of Thurrock?”

“No, she’s doing exactly the right thing. As a lifelong Conservative I’m disgusted by how many MPs are trying to force through BRINO and if anything near the Chequers betrayal were enacted I could never vote Conservative again. We voted to leave the EU. All of it.”

“Keep it up Andrea, we are behind you. Jackie, you need to reassess your understanding of democracy… Support a full and decisive Leaving from the EU, as directed to do so, and as pledged in our Manifesto at GE2017”.

“You’re asking a principled MP to stop mentioning Brexit because it annoys you. Andrea, is an excellent MP who serves her constituents well. You, on the other hand lack Andrea’s moral fibre, time you represented the majority of your constituents, it’s what you’re paid for.

“Bravo to Andrea Jenkyns for calling out JackieDP who told her to “give it a rest” from fighting for Brexit. Have you forgotten how Thurrock voted in the referendum, Jackie? We’ll remind you… 72.3% OUT!”

There was support for Ms Doyle-Price.

“Yeah…but not many Thurrock voters work for Honda, Nissan, JLR, Toyota etc…do they brave Andrea ?? (Who will still pick up her taxpayer stumped salary after brexit.)”