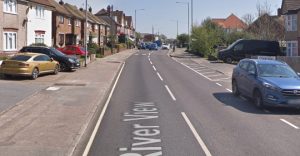 ESSEX Police are appealing for information after two people were robbed at knife point in Riverview, Chadwell St Mary, at around 11.15pm on Tuesday, October 2.

A man and woman were walking on a footpath towards Stour Road when they were stopped by three suspects.

One of the men demanded their mobile phone and another threatened them with a knife.

They grabbed a gold coloured i Phone 8+ from one victim and attempted to take an I-Phone 6+ and an I-Phone 10 from the other victim.

The first suspect is described as being black, around 5ft 9ins, aged in his early to mid 20s, of a medium build and was clean shaven with short black curly hair. He wore a black jacket and dark bottoms.

The second suspect is described as being black, around 5ft 9ins, aged in his early to mid 20s and is clean shaven with short black curly hair. He was wearing a dark jacket and grey jeans.

The third suspect is described as being white, around 5ft 11ins, aged in his early to mid 20s and wore a grey and white scarf covering his face so only the eyes could be seen, a grey hooded top with the hood over his head and white trainers.