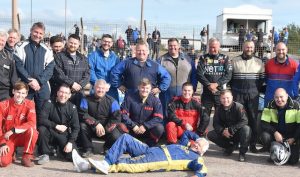 Amongst the entry, Terry’s sons – Daniel and Thomas, were out for their annual Banger racing session and had a lot of fun during the afternoon, although out of luck as regards the results. In fact it looked like an East Anglian rout during the heats with wins for Niki Jarvis and Gareth Parker, before the consolation saw Adrian Martins take the win.

The final was where the bulk of the action took place, John Chapman was spun out of turn two and took a massive hit from Aaron Chapman at about the same time that a spinning Brad Spicer took an accidental hit in the door. James Hutchins then thundered Luke Hardy into the parked up Charlie Barwell car and Jack Coveney destroyed Aaron Chapman. The red flags flew to check up on everybody and at the restart the pace was relentless with Sonny Sherwood turfed into the infield marker tyres by Tom Greenstreet, with Jake Stewart dodging a few bullets to take the win.

The Destruction Derby saw Sherwood in brilliant form, despite racing one of the smallest cars on the day – a Nissan Micra. He attacked James Shrimpton, Shrimpton then falling fowl to a bigger hit from Craig Thurlow, he then spun the returning Sam Watson into the fence and destroyed Danny Chiddle, Tommy Harding and Steven Archer with big hits. Unfortunately his car was largely crippled by the final hit which left him open to a couple of killer shots from Tom Greenstreet, Greenstreet then was free to follow the ailing Dan Stacey car into a pile of debris on turn one to seal the victory.

The Lightning Rod Supreme Championship saw 22 cars take to the track and it proved to be a fairly comfortable run to the flag for Dan Guidotti, once he got away from pole man, Keireen Thomas. Thomas fell back and eventually retired with Nigel Carroll and Connor Reeve filling out the podium places. Jim Heard won the remaining two races on the programme, the last of which was quite a trial with two pile ups in two successive starts resulting in damage for Nigel Carroll, Chris Reeve and Sam Shirmer.

The Stock Rods saw three great races with Joe Simmons benefiting from a restart in the main Terry Skeef memorial race to grab the initiative from heat winner, Rob Taylor. A great drive from English Champion, Jordan Morgan took him all the way to second place from the back, just pinching the spot from Taylor in the final moments. Ricky Lofthouse was the other race winner on the day.

Finally a lowly entry of 2.0L Stock Cars fought it out with Aaron Totham winning both heats, before the 2018 Points champion Alfie Jones took victory in the final.