THE Basildon Labour Group has tabled an emergency motion to Full Council following the announcement that Basildon taxpayers are being asked to foot the £4million bill for the Dale Farm clearance.

“The Conservative Party made a promise to the public. They guaranteed to us that they would recover every single penny of the £4million. To learn that we have only recovered £2,000 and a decision appears to have been taken to halt the active pursuit of the outstanding monies is unforgivable. 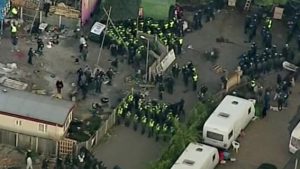 “Labour is demanding an urgent debate at Full Council this week which will see us convene a task force with the remit of working with the Government and land registry to recoup the full cost by December 2019. We also want an investigation to be carried out into who made the decision to halt the recovery of cost without Full Council’s approval.

“It is no secret that money is tight. Back in 2011 when Dale Farm was cleared, Basildon Council received £15.8 million in central government grant. This year we received less than £220,000 and next year we will receive £0. Therefore we cannot afford to give up on £4million. The Conservative Party promised the public they would recoup that money and we are going to hold them to it.

“This has been a disastrous week already for the Basildon Conservatives who we now know have failed to deliver on their Dale Farm cost recovery promises and who on Thursday want Full Council to reward illegal activity by agreeing to legalise illegal pitches in more than 16 different locations across the borough.

“Andy Baggott is losing control of the Council and his group and it is the public and public purse that is suffering as a consequence”.

One Response to "Over the border: Basildon Labour concern over £4 million Dale Farm clearance bill"