NINE members of a drug-dealing gang linked to a series of violent incidents and anti-social behaviour in Thurrock have been made the subject of strict injunctions which ban them from parts of the borough.

The injunction, one granted at Chelmsford County Court on Friday October 19 and those granted previously, were brought about following partnership work between Essex Police’s West Operation Raptor team, Thurrock Borough Council and brave members of the community. 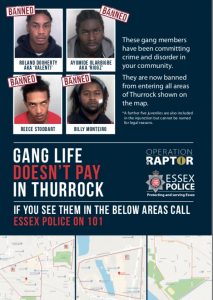 The court heard the gang, who refer to themselves as “C17”, first came to the attention of the Operation Raptor team in May 2017 as they became heavily involved in drug dealing and violence.

The gang, which is headed up by 18-year-old Roland Douherty aka ‘Valenti’, have plagued the town centre, town park and beach areas of Grays as well as Lakeside, dealing drugs in those areas and committing crime and disorder.

The court were told that the gang have preyed on young children in the community, enticing them into the gang and then exploiting them by getting them to run drugs, carry cash from deals or knives.

During the injunction hearing, the court were told the gang use young girls, including those who have gone missing from home, to hold drugs for them. A number of members of the gang have been arrested for serious sexual offences including victims under the age of 16 and have been investigated for Child Sexual Exploitation offences.

The gang are also known to target vulnerable drug users, using violence and intimidation to take over their homes for use as a drug dealing base (a practice known as ‘cuckooing’).

Violence around C17 is mainly borne out of rivalry with other gangs and drug lines and this recently took a tragic turn with the murder of Roland’s 15-year-old brother Jordan, who was murdered in Romford in June this year.

The escalation in violence with rival gangs has played out in numerous so-called ‘drill’ music videos filmed by members of C17 which feature weapons and provocative language and gestures. Drill is a type of rap music that originated in South Chicago in America. It features dark, violent lyrics and is often used to perpetuate and even escalate gang disputes.

Chief Supt Andrew Mariner said: “The C17 gang have not just been selling drugs on our streets, they have been targeting young people and getting them involved in gang life, preying on the vulnerable, exploiting young girls and been responsible for unprecedented levels of serious violence, crime and disorder, including attacks involving acid, stabbings and violent robberies.

“They have left some businesses and members of our community afraid to go about their daily business.
“Our Operation Raptor team have repeatedly and proactively targeted this gang, arresting many of C17 and remanding and convicting a number for a range of serious offences, but we have not stopped there.

“Essex Police, our partners at Thurrock Borough Council, residents and businesses are not prepared to put up with C17 and that is why we have come together to provide the evidence to seek a hard-hitting injunction that bans them from the parts of our community they have blighted.

“The injunction also seeks to prevent the further exploitation of young members of the gang who have been enticed into a dangerous and violent lifestyle, living with the constant threat of violence if they don’t do as they are told.

“The sad reality is that a number of members of this gang, including some of the elders, have at some point in their life been missing children.
“It is often the cycle of vulnerability that results in a lifetime of violence. We are tackling that side of the gang by using the order to ensure they seek employment and engage with the Gangsline charity to divert them away from their dangerous lifestyle.

“We have already had one member of this gang who has died in violent circumstances and it is time that violence stops. We won’t stop until this violence is removed from our streets.”

Cllr Rob Gledhill, Leader of Thurrock Council, added “It’s very important for everyone in the community to support the police in their work to tackle the small minority of individuals in our local area who attempt to commit disgusting crimes such as drug dealing and assault as well as preying on vulnerable teenagers and young girls.

“These criminals completely lack respect for others, and their behaviour can have an extremely negative impact not just on the people they directly interact with but the wider community.

“The first injunction has appeared to make an impact on the Grays Town Centre area and I am delighted that a second injunction has been secured, which will mean even more members of this criminal gang will be unable to bring violence and destruction to areas near our homes and businesses.

Since the first injunctions were granted on seven members of the gang, the local community have noticed a marked difference in their quality of life.

One business manager in Grays Town Centre said: “My staff and customers were very intimidated and scared, witnessing drug deals or smelling cannabis every day.

“Since the injunction the drug dealers have all disappeared and staff are no longer afraid to leave work at night.”

Another business manager added: “People were afraid to come in and walk past them. They would regularly threaten my staff and make them feel intimidated about coming to work.
“Now they feel safe and actually enjoy coming to work.”

2 Responses to "Crime: Nine members of C17 gang banned from parts of Thurrock"