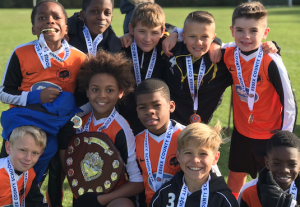 Kevin Watts, Thurrock’s co-manager said, “The team have only been together for a few weeks and already have made their mark by winning this prestigious competition. The team won all of their games against some extremely strong opposition and this sets out their intentions for the remainder of the season.

“The quality of football was very high and the Thurrock team were outstanding in every department. We were very proud of them as they represented Thurrock and their schools with great pride.”