By Staff Reporter on November 2, 20183 Comments

TEMPERS boiled over in Thurrock’s council chambers when a motion to congratulate children on exam results became a row about education cuts.

At a full council meeting on October 31, Conservative councillor James Halden proposed a motion that called for the chamber to congratulate schools for their summer exam results. 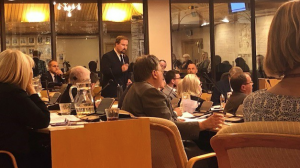 But the proposal was quickly politicised by members of the Thurrock Independents who put forward an amendment condemning the Government for making cuts to education and calling for them to be reversed.

Independent Councillor Jack Duffin told the council: “Our students and people involved in our schools in Thurrock are doing a fantastic job but it is important to note the backdrop they are having to fight against to achieve their results. An eight per cut per pupil since 2010 is disastrous, it is not a small cut, it is a massive, massive cut.

“It is important to have a balanced motion that understands they are doing this against very difficult circumstances and this government is actively worsening our situation in the borough.”

Council leader Rob Gledhill accused the party of turning the motion into “political football” which “demeans the children”.

Deputy leader Shane Hebb also hit back at the Independents telling them to “get off the internet” and visit a school to see how students are performing. He added that the Government had made “record investment” into the education sector.

Labour leader John Kent said: “We’ve heard from the Independent group of the eight per cent cut, which is true. There is not a school in Thurrock that has not seen funding cut for the period of 2015 to 2020 – there has been a cut of £5.6million, which is £230 per pupil on average in Thurrock.

“It is also true that there is more investment going into schools than ever before but that is simply because there are more children in school than ever before. The well-off Tories don’t have a clue what damage their austerity has done to our schools and our children.”

The row left councillors shouting over each other and Mayor Barbara Rice, who chaired the meeting, had to call for order five times, urging councillors to stop arguing across the chamber.

The amendment eventually passed when Labour and Independent councillors voted unanimously in favour of it while the Tories abstained.

After the meeting the Independents criticised the Tories for not voting in favour. They claimed they were “unwilling to congratulate the students in our borough for their fantastic grades”, despite this being the point of the motion before the amendment.

3 Responses to "Tempers boil over as Thurrock councillors debate education"