By Staff Reporter on November 3, 20184 Comments

A CONSERVATIVE councillor for Stifford Clays has voted against a motion that proposed to “revisit” the decision to fine residents in her ward from parking on their “crossovers”. 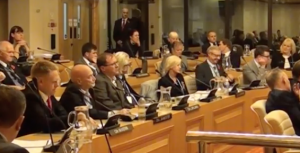 The motion was put forward by the leader for the Labour group, cllr John Kent.

It states: “Thurrock Council notes that since decriminalisation of parking in 2005, residents of Lodge Lane have been able to park on their crossovers – as they had been able to for decades before. The decision to enforce against residents parking in this way has caused significant anger and concern against those affected.

Council calls on Cabinet to revisit this decision and find a way of allowing residents to park in the way they have for many, many years without any problem.

Cllr Kent believed there were opportunities to extend the “moratorium” i.e: not fine residents, while they explored other options.

He added:”There has to be a common sense answer to this problem. Every resident I speak to wants to talk about this for fifteen or twenty minutes.

All Labour and Thurrock Independents councillors voted for the motion, All Conservative councillors including cllr Elizabeth Rigby, whose ward of Stifford Clays covers the north side of Lodge Lane, voted against the motion.

The motion was carried.