C2C: Veterans to travel for free as part of Armistice commemorations 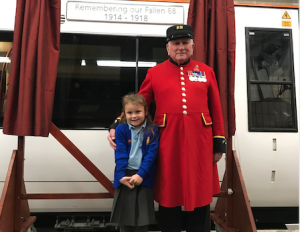 VETERANS and current service personnel travel for free on c2c this Sunday, as part of the train operator’s activity to commemorate the centenary of the Armistice to end the First World War.

Those travelling to the national service of remembrance at the Cenotaph can also have a free cup of tea and slice of cake at Fenchurch Street courtesy of c2c, plus all trains running via Laindon and via Ockendon will be formed of 8-carriages to provide more seats for those travelling to and from the capital.

c2c’s fleet will be led on the day by the special train which was named last week in honour of the 88 railwaymen of the then-London, Tilbury and Southend Railway who died during the First World War. The train also carries commemorative poppy designs by 7-year-old Rosalia Folley from Leigh-on-Sea, who won a local competition to design the train.

c2c has also raised over £1,500 for the Royal British Legion this month by selling special poppy pin badges to staff.

c2c Managing Director Julian Drury said: “We offer free travel to veterans and service personnel each year as part of our tribute on Remembrance Sunday. To mark this year’s centenary we also unveiled our own local memorial to provide a permanent reminder of the bravery of our fallen 88 railway colleagues.”

To travel for free on Sunday, service personnel simply need to show their military ID and veterans display their medals.