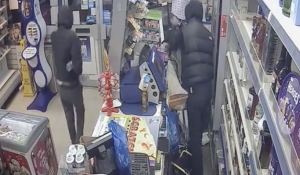 ESSEX Police is appealing for information about an armed robbery at a Purfleet shop.

One was armed with a knife and another had what appeared to be a gun covered with a plastic bag.

These two men threatened a shop assistant and one demanded he open the till. However the victim was unable to open it and no money was taken.

A second shop assistant challenged the robbers, who fled the store.

The suspect carrying the knife was described as black, aged 18 to 23, about 6ft tall and slim. He wore a black body warmer, a T-shirt and dark grey jeans.

The man who had what appeared to be a gun was described as black, aged in his early 20s, and wore a black hoodie and dark face mask.

Investigating officer PC Beth Finch said: “I’m hoping the CCTV footage will jog the memories of anyone who was in the area at the time and can remember seeing these men.

“I know it’s not the clearest footage, but someone in Purfleet will know who these people are.

“If you have any information that can help us identify them please get in touch.”

Alternatively, contact the Crimestoppers charity 100% anonymously on 0800 555 111 or use the anonymous online form at Crimestoppers-uk.org
You can also report online at www.essex.police.uk/do-it-online