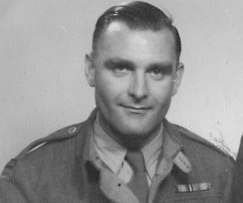 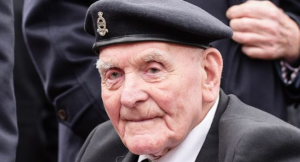 A BLIND war veteran aged 103, the son of a man killed in the First World War 100 years ago, and who ran a post office in Grays after surviving the horrors of a Japanese prisoner of war camp will be the oldest participant in Sunday’s centenary Armistice Day parade in Whitehall.

Former army sergeant Ron Freer will be representing the charity Blind Veterans UK when he leads 100 comrades who also lost their sight when he attends the service in London.

Ron Freer’s father W.A. Freer’s grave at Dernancourt Communal Cemetery in the Somme. Pictures: Blind Veterans UK
Mr Freer, who laid a wreath at a previous Cenotaph march past just days after his hundredth birthday said it was a “huge honour” and the Remembrance commemorations hold a “special significance” for him as his father died in battle just weeks before the end of the First World War.

Ron, who lives with his daughter in Margate, has been supported by Blind Veterans UK (formerly known as St Dunstan’s) for almost 70 years, and it was their help when he returned to England after the war that led to his career in the Post Office.

Born in Teignmouth, Devon, on 21 October 1915, Ron joined the army in 1931, aged 15, initially with the Royal Horse Artillery and on the outbreak of war was posted to defend the then British colony Hong Kong.

In late 1941, the Japanese attacked Hong Kong including Fort Stanley, where Ron was based. After 18 days of fighting, his garrison surrendered against overwhelming odds.

He became a Japanese prisoner of war (POW) and remained so until the end of the Second World War. It was this four year ordeal that led to Ron losing his sight because of the malnutrition he suffered in the camp.

Ron says: “The camp was situated on the edge of the harbour with high fences all around. The Japanese brought in a bag of rice for each unit but only enough for one meal a day per man. We cut an oil drum in half and used the bottom as a boiling pot for the rice.

“Each man was given a scoop of rice but many were unable to eat it and looking at the portion of rice, one could see mice droppings and insects. Disease soon broke out resulting in many deaths.”

In 1943 the group of POWs were transported on a ship called The Lisbon to Japan. It was on this journey that Diphtheria broke out amongst the two thousand men aboard. Ron caught the infectious disease and his life was only saved by the actions of two doctors.

He says: “Lying in the hut with all the others suffering, I heard a voice say ‘turn over Sergeant’, I was then injected with something and the voice said, ‘you are very lucky’. I knew then that it was our medical officer. He later told me that a Japanese civilian doctor had managed to smuggle in six phials of anti-diphtheria toxin so the two of them had saved my life.”

A month later, Ron had completely lost his sight and most of his hearing and spent the remainder of the war in the camp medical hut. At the end of the war he returned to the UK via the Philippines and New Zealand. It was then that his journey with Blind Veterans UK began. He has been supported by the charity since 1946 and has gone on to live a full, happy, independent life.

He says: “I returned to the UK after being a POW for nearly four years. Having lost my sight as well as my hearing my future seemed very dismal and I didn’t want to think about what lay ahead. This was until I was taken to St Dunstan’s.

“I was given my confidence back bit by bit through training such as learning Braille. My main objective, as man in his early thirties, was to find employment. After I married, I had the opportunity of opening a new post office and my wife and I continued to operate it for 25 years. This was all thanks to Blind Veterans UK, who helped me to purchase the property.”

During his Post Office career Ron ran the post office in Ilfracombe, Devon and then offices in Grays and Gravesend.
Blind Veterans UK was founded in 1915 and the charity’s initial purpose was to help and support soldiers blinded in the First World War. But the organisation has gone on to support more than 35,000 blind veterans and their families, spanning the Second World War to recent conflicts including Iraq and Afghanistan.

Ron says: “Blind Veterans UK. It is an extraordinary charity, which makes an unbelievable difference to the lives of veterans like me, and our families too.”

For more than 100 years, the charity has been providing vital free training, rehabilitation, equipment and emotional support to blind and vision impaired veterans no matter when they served or how they lost their sight.