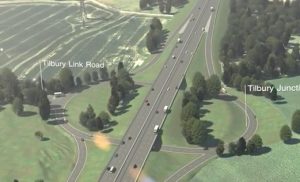 ANGRY councillors have accused Highways England of deliberately overwhelming residents with the “sheer size and complexity” of its Lower Thames Crossing consultation.

The consultation was launched last month and runs until Thursday, 20 December, but the documents run to thousands of pages.

Thurrock Council fear people could therefore be put off from responding and believes it could be a deliberate ploy from Highways England.

“It’s very disappointing that Highways England has refused to allow the council any extra time to bring our consultation report through our normal governance processes – the report containing the response now has to go to the Full Council meeting on Wednesday 28 November, which means officers will only have had five weeks and three days to analyse thousands of pages of material before submitting the proposed response. We will be writing to Highways England to let them know that the Task Force is very dissatisfied with this and to again request an extension to the deadline to submit our response.

“I cannot emphasise enough how important it is that everyone in the borough takes the opportunity to have their say both by attending one of Highways England’s public information events and, most importantly, completing a feedback form either online or in paper form.

Cllr Rob Gledhill, Leader of Thurrock Council, said: “Clearly proposals for any infrastructure project of this scale are going to be detailed and complex, but there seems to have been a real lack of effort from Highways England to present this consultation in a way that people can easily access and understand. For instance, even the non-technical summary contains technical language and acronyms, the easy read version is only available on request, there is an extortionate cost for translation and an unacceptable 15 working day response time for emails.

“Both prior to, and throughout the consultation process, Highways England has treated us and our residents with utter contempt.

“This terrible scheme will have a devastating impact on Thurrock and, despite the sheer size and complexity of the consultation, I would encourage everyone to take part.”

Cllr Mark Coxshall, Portfolio Holder for Regeneration, added: “All councillors remain unanimously opposed to the Lower Thames Crossing proposals and we are continuing to wade through the consultation materials to ensure our objections are as robust as possible.

“The proposed scheme offers no obvious benefits for Thurrock and would simply cut through important greenbelt land and damage future development opportunities.”