Thurrock’s plans for thousands of homes thrown into chaos 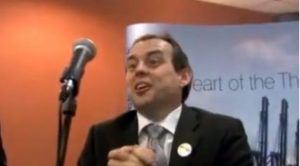 POLITICIANS and campaigners have spoken of their anger and disbelief after a Thurrock Tory councillor defended his party’s actions in not bring the plan to build dup to 32,000 homes in the borough to a special meeting of the council planned for next Tuesday.

The meeting is all about the council’s stance in opposing the Lower Thames Crossing, but it was widely believed that agreeing the local plan was part of the agenda as it is perceived as vital on formulating local strategy.

The Thurrock-based Thames Crossing Action Group joined with local Independent Group councillors yesterday afternoon in expressing disappointment when the agenda for the meeting was announced – without the local plan on it.

And their anger increased when Cllr Coxshall, the council’s portfolio holder for regeneration, defended his party’s decision by saying they were not going to ‘rush into things’ and turned his anger on opposition councillors.

That prompted a new statement today (Tuesday, 4 December) from the action group, whose spokesperson Laura Blake said: “We are even more concerned now after reading Cllr Coxshall’s statement. How can this be rushing it? The Local Plan has been in the pipelines for so long now. It has been due to come to full council on so many occasions.

“There was an all-party page turning meeting last Thursday all parties worked on the Local Plan to ensure that there would be no opposition at the Extraordinary Meeting on Dec 11th. There is more danger that the Government will step in over the Local Plan if there is no sign of any progress with it, than if it is put on the Agenda and is passed, even if the other two parties abstain rather than support it, as it shows signs of progress.

“Our understanding is that the Government won’t step in unless there is no sign of progress which is where we are heading if the Conservative party won’t put it on the Agenda. When will they be prepared to put in on an Agenda? Will it be before the May elections? We need to ensure as residents that our Council is acting in our best interests and that they progress with the Local Plan, especially at this time when it is so relevant to the Council’s response to the proposed Lower Thames Crossing consultation.

“We have it in writing from Cllr Luke Spillman, leader of Thurrock Independent Party that he explicitly assured the administration that he would ‘abstain’ from the vote, to allow it to pass. He states that Labour gave the same assurances.

“We also have it in writing from Cllr John Kent, leader of the Labour Party that he is “at a loss to understand why the Local Plan isn’t going to council next week – it has been stressed to all councillors the importance of the Local Plan being progressed at the same time as framing the council’s response to the Highways England consultation. As a matter of interest, Gerard Rice and I would have recommended that the Labour Group supported progressing this stage of the Local Plan next week”.

“We are also still waiting on a response from Cllr Rob Gledhill as leader of the Council. We are very aware that the Council have hired an expert officer specifically to oppose the Lower Thames Crossing proposals. We know from various councillors that she has advised everyone how extremely important it is that the Local Plan has to be passed as it should be an integral part of the Council’s objections and response to the Lower Thames Crossing consultation.

“By the very fact that Cllr Coxshall and his party are refusing to put the Local Plan on the Agenda, and give the other parties the chance to do the right thing, and get it passed is very disappointing, frustrating, and questionable to say the least. What is the real reason they won’t put it on the agenda? We have it in writing that it wouldn’t be opposed.

“How can any of us have confidence in Cllr Coxshall after he stated: ‘In terms of the impact this has on the Lower Thames crossing, let’s be clear, it does not.’ Completely against the advice that the expert officer gave.

“Again we stress all 49 Thurrock Councillors say they are opposed to the proposed Lower Thames Crossing, NOW more than ever is the time to put their money where their mouth is and prove that to each and every one of us. We appreciate the Council’s motion to support judicial review against Highways England, but if they really mean that, why are they weakening their response to the consultation, by not allowing the Local Plan to be put on the Agenda so it can be included in the Council response to consultation, against their own expert officer’s advice?

“It’s time for all parties to put politics aside and to do what they are there to do, which is the best thing for us, the residents!”