Blogpost: The 25 most saleable streets in Purfleet 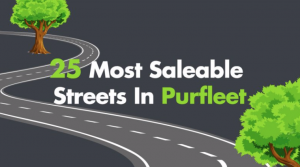 Top 25 Most Saleable Streets in Purfleet

FOLLOWING on from the last article, I said that Caspian Way had the most properties sold in the RM19 Purfleet postcode. I still felt that this information wasn’t telling the whole story, as some roads in Purfleet have more properties on them than others. I promised that I would compare the average number of properties sold by the actual number of properties on that street. This would help find out the streets whose owners proportionally moved (or sold) more often than the rest of the locality.

To give some foundation to the article, in 2017, Purfleet homeowners had, on average, lived at their existing address for 17 years and 6 months. However, when I looked at the difference between homeowners with and without a mortgage; Purfleet homeowners without a mortgage had lived in their home for an average of 23 years and 9 months, compared with 10 years and 1 month for homeowners with a mortgage. Interestingly, Purfleet’s Thurrock Council house tenants have on average resided at their present home for 11 years and 4 months, whilst finally for those who rent from a private landlord, tenants generally have lived in their property for an average of 3 years and 11 months (up from 3 years 5 months only five years ago).

The RM19 street in the top 25 saleable streets, with the highest number of households on it is Caspian Way, which has 320 residential addresses. Yet since 1995, only 332 properties have changed hands (some multiple times!). This means the street’s saleability or churn rate is 103.8%.

However, the street or road that has the highest saleability or churn rate is Brimfield Road … which has 123 households on it. Since 1995 there have been 326 house sales – a saleability rate of 265.0%. Here is the full breakdown of the top 25 streets …