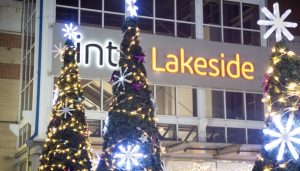 A POLICE officer from Purfleet has had an early Christmas present by winning a £400 shopping spree at intu Lakeside and hundreds of Willy Wonka sweets that taste like Christmas dinner for his family and friends.

32 year old John Johnson was won of five winners of a competition with intu, owner of some of the UK’s largest and most popular shopping centres, to win impossible gifts for those hard-to-buy-for people and a £400 intu Gift Card to help with the festive shopping.

Earlier this year some of Britain’s most ingenious inventors joined with intu to create ‘impossible-to-buy’ gifts for this year’s Christmas wish lists. Other weird and wonderful inventions won around the country include turning people into LEGO characters and comic book stars through the artist behind Dennis the Menace.

Research as part of the competition found that people in Essex spend 25 hours trying to find the perfect gift for loved ones and one in ten parents (11 per cent) have at least one impossible gift to find this Christmas. According to the research, the average Brit will spend £425 on Christmas presents this year, up just under one per cent on last year.

Ben Leeson, Marketing Manager at intu Lakeside, comments: “It’s a lovely truth that children and even adults will sometimes put impossible gifts on their Christmas lists, but at intu Lakeside you’ll find all your Christmas presents – even the seemingly impossible ones. A big congratulations to John for winning a big prize and we hope the £400 intu Gift Card makes his Christmas more magical and hope the sweets solve some impossible-to-buy-for conundrums!”

The impossible range of gifts follow intu’s Christmas TV advert, which sees a duckling finally able to fly with the help of a brand new drone.