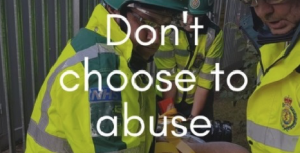 THE East of England Ambulance Service NHS Trust (EEAST) has relaunched its Don’t Choose to Abuse campaign, highlighting the abuse ambulance staff receive ­­– and the consequences for perpetrators.

During 2017-18 there were more than 1,000 incidents reported by ambulance staff, including 252 incidents of physical abuse and intimidation and eight incidents where weapons were used.

The campaign has been re-launched across the region (Bedfordshire, Cambridgeshire, Essex, Hertfordshire, Norfolk and Suffolk) with a poster campaign going out in the new year to pubs, licensed premises and other public places, reminding people that assaulting ambulance crew members can result in a prison sentence of up to 12 months.

A recent case at Cambridge Crown Court highlighted the kind of violence crews can face. Jordan Hurst was sentenced to two years in prison for a rampage in Cambridge in July last year, where he assaulted a van driver, a cyclist, a police officer and two paramedics called to the scene. He threatened and abused one crew member, and attempted to trap his leg in the door of the ambulance before punching the other crew member.

Dorothy Hosein, Chief Executive of EEAST said: “No-one should have to face abuse as part of their job, but when ambulance crews and call-handlers, who are there to help, are abused it’s totally unacceptable.

“Some members of our staff have reported they receive some form of abuse almost daily. This can have a cumulative effect on people’s wellbeing, and part of our campaign is telling staff that if they receive abuse from members of the public, they will be supported.

“We welcome the strengthening of the law, and will support our staff in reporting abuse and pressing for the strongest penalties.

“So, while we appreciate that we often deal with people under difficult circumstances, we would like to remind everyone they have a choice.
“Don’t choose to abuse – the consequences can be serious.”