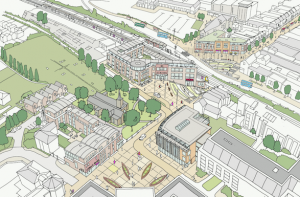 A LEVEL crossing rated one of the most dangerous in the east of England could be replaced by a pedestrian underpass.

Council documents show the aim of removing of the crossing on Grays High Street is to prevent people from jumping the closed gates or using the level crossing, which is located close to the platform, as a means of avoiding paying rail fares.

The council has employed design firm Steer to collaborate with National Rail on the £27.4million underpass but the partnership has caused several setbacks.

When the plans for the underpass first began to come together, the rail company was expected to provide up to £4million in funding but at the end of 2016 they slashed this to just £700,000.

Cost estimates set out in the initial design stage by National Rail were also used as the basis for the council’s application for £10million in funding from the Government’s Local Growth Fund but ended up being £1.5million higher than predicted.

The council was successful in its bid for £10.8million from the growth fund and National Rail is now expected to fund the additional £1.5million to offset the increase.

However, its budgets are under review and a new council report published in December notes that “some of this funding may be lost” by March 2019.

Overall the council hopes to fund the project through a combination of grant funding, money from National Rail and £9million allocated from the council’s capital budget.

The December report has been published ahead of a regeneration scrutiny meeting on January 8 where members will discuss how the design work is progressing.

They will also look at a draft timeline for the scheme which has several milestones in 2019 including the launch of a public consultation in February and the submission of an outline planning application in August.

The underpass is at the centre of a wider scheme which the council calls the Grays South Regeneration Project. Another part of this is a £10million redevelopment of the council’s civic offices which has attracted criticism from residents and opposition Labour and Independent councillors because it was approved to move forward without a business case that indicated how residents would benefit.

One Response to "Grays: New £10 million underpass could be set to replace level crossing"