Over 800 children from Thurrock exposed to domestic abuse

THE NSPCC is calling on the government to recognise the 6,091 children living with domestic abuse in Essex as victims under law.

The government will miss an opportunity to protect children from the effects of domestic abuse if it ignores calls to recognise them as victims in their own right, the charity has said.

The Government’s proposed new definition of domestic abuse ignores the effect growing up in abusive households has on children, despite it being a factor in more than half of child protection assessments across England last year.

The children’s charity is urging the Government to publish its Domestic Violence and Abuse White Paper without delay and recognise children as victims in its domestic abuse laws.
A consultation closed last May but the government have yet to publish the outcome.*

The NSPCC received 7,377 contacts to its Helpline from members of the public concerned about children in domestic abuse situations in 2017/18. 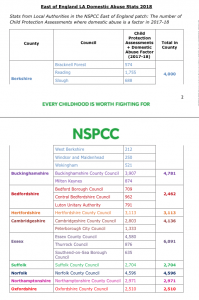 Department for Education figures show domestic violence was a factor in 246,720 child protection assessments across England in 2017/18, leaving potentially a quarter of a million child victims unrecognised by the justice system.** In Essex, it was a factor in 6,091 assessments.

The call is backed by brothers Luke and Ryan Hart whose father murdered their mother and sister in 2016 after two decades of domestic abuse.

Ryan said: “We didn’t recognise it as abuse because there was never any violence but it was coercive control, financial, emotional, psychological abuse.

“What is often missed is the effects of living in that environment has on kids, growing up not only witnessing abuse but experiencing it day in and day out, how that affects us growing up and into adult life.

“Children living with domestic abuse are not just witnesses to the abuse, they are victims themselves. Luke and I know first-hand the psychological effects, emotional effects can have on you by seeing someone you love being a victim of abuse.”

Services such as the NSPCC’s Domestic Abuse, Recovering Together (DART) help children and mothers recover from domestic abuse together and can help minimise the long term impact domestic abuse has on child victims.

Almudena Lara, Head of Policy at the NSPCC, said: “It is quite astonishing that the government is dragging its feet when deciding whether to recognise young people as victims when almost a quarter of a million children that we know of are living with domestic abuse in England alone.

“For this to be done effectively we need government to open their eyes to the harm domestic abuse has on children and give them victim status in the upcoming White Paper to ensure they receive the services they need.”

Adults concerned about a child living with domestic abuse can contact the NSPCC Helpline confidentially for advice and support on 0808 800 5000 or email help@nspcc.org.uk