Police and Fire part of Council Tax set to rise 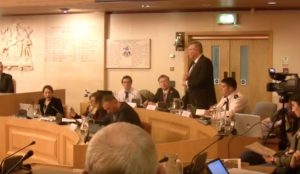 ESSEX Police could soon be able to recruit an additional 215 police officers over the next year focusing on visible, frontline policing.

In a public survey carried out at the end of last year more than 71 per cent of respondents said they would be prepared to invest more in policing to help improve the service provided. Seventy-three per cent of positive respondents said they would be prepared to pay at least £20 a year more. In the light of that and of detailed discussions with Chief Constable B J Harrington, Mr Hirst is proposing to increase the policing element of the Council Tax by £24 a year for the average household, the maximum permitted by government without a referendum. This will mean that the average Band D property will pay £192.96 for policing in a year, an increase of £2 per month. The current levy is £169.02 per year.

In relation to the budget for Essex County Fire and Rescue Service, Mr Hirst is proposing to the Police, Fire and Crime Panel to increase the precept by roughly the rate of inflation. This will be equivalent to an increase of £2.07 a year resulting in a rise from £70.38 to £72.45 for a Band D Council Tax property.

Roger Hirst said: “It is important to remember that Essex Police and Essex County Fire and Rescue Service are separate services with separate budgets.”

The proposed total budget for Essex Police is £300.478 million. £175.8 million will be from central Government and £124.6 million will be drawn from local taxation, if approved by the Panel.
Essex County Fire and Rescue Service proposed total budget will be £73 million with £46. 876 million coming from Council Tax and £24. 533 million from government grants with the balance being drawn from the service’s more than adequate reserves.

Last year, Mr Hirst increased the policing element of the Council Tax which led to 150 additional officers joining Essex Police. These officers have been recruited, trained and are already arriving in communities across the county.

Mr Hirst said: “People across the county have been telling me that they want more police officers and that they are prepared to pay more to get them. If my proposed budget is accepted it will mean the Chief Constable will be able to bring police officers numbers up to over 3,200 by March next year which will get Essex Police near where it needs to be in terms of establishment.”

If agreed by the Panel, the money will be invested in 215 additional police officers on top of the 150 recruited this year as well as 32 operational police staff and 18 police support staff. They will be divided into a number of teams including:
68 officers dedicated to town centre policing
50 officers to local policing teams
21 roads policing officers
20 officers dedicated to working with children and young people
20 officers to boost the force’s crime and public protection command
There are also plans to create a dedicated business crime unit as well further investment in the gypsy, traveller and rural engagement team and serious crime directorate.

In terms of Essex County Fire and Rescue Service, the proposed budget will include a number of initiatives including:
£400,000 to support the recruitment and retention of on-call firefighters
£372,000 to fund sprinkler initiatives in vulnerable communities
£600,000 to support improvements to operational training
Full details of the proposals are available to view as part of the published papers for the Police, Fire and Crime Panel. They are available via this link: