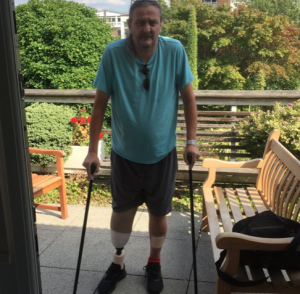 A KIND TRIBUTE was paid to Thurrock journalist Andy Lever by former MP Andrew McKinlay at his funeral service on Thursday, 17 January.

Andy, 61, died following a heart attack on Saturday, 22 December and his funeral service at Pitsea Crematorium was attended by family, friends and former colleagues.

Among the mourners was former borough MP Andrew Mackinlay, who said: “Andy’s very moving funeral, attended by so many colleagues and friends, reinforced what we all knew. Namely that Andy was a passionate and compassionate scribe, dedicated to both his family and his community.

“With his journalistic and editorial skills he was able to craft entertainment, advance democratic debate both locally and nationally, and make his mark standing for justice.

“He served Thurrock with pride both as a newspaperman and in the service of the Local Authority.

“Thurrock truly says ‘thank you’ for the life and work of Andy Lever’.”