Were you a member of The Chelmsford Ballet Company?

Were you a member of The Chelmsford Ballet Company?

AS part of The Chelmsford Ballet Company’s 70th anniversary celebrations, it is inviting past members of company to get back in touch, to share stories, and reveal any archive material (such as photographs, newspaper clippings) that they may have to form part of this special year. Past members have also been invited to watch a rehearsal of A Midsummer Night’s Dream, followed by afternoon tea, the chance to meet the dancers and share stories about the company. 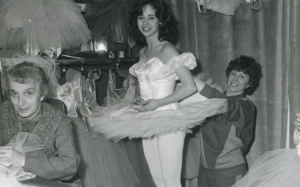 This special day will form part of the company’s year-long plans to celebrate its history, stage its anniversary production at the Civic Theatre from 20-23 March, and look ahead to the next 70 years. The Chelmsford Ballet Company will present A Midsummer Night’s Dream & 70th Anniversary Celebrations, accompanied by a historic performance from its past repertoire, choreographed by Annette Potter. Annette was appointed as Artistic Director 10 years ago, and 10 years later much of The Chelmsford Ballet Company’s success is attributed to her involvement with the company at many different levels.

The Chelmsford Ballet Company has a fascinating history, and many members have passed through its doors over the past 70 years. The company president, Elizabeth Baker (pictured in blue), was a dancer with the company over 30 years ago. This particular image is from the first performance of Annette Potter’s with the company in 1987 – it was here she met her husband, and 32 years later they are both still integral to the company’s DNA. Another member, Kathy Gregitis, joined as a dancing member in 1967 and remains an associate member – her last show with The Chelmsford Ballet Company was in 1997. The company’s patron, Christopher Marney, danced with the company, Matthew Bourne’s New Adventures, and is now Artistic Director of Ballet Central. Another dancer with the company, Lee Mead, needs no introduction. Many of the Company’s dancers have also gone on to study at vocational schools such as English National Ballet School and Central School of Ballet, and then dance professionally.

The company is therefore looking back as much as it is looking forward, and past members can play their part in the celebrations too. For more information and to RSVP as a past member, contact Jacqui Murphy (Heuer), dancing member 1987-1989, on Jacqui.murphy.dance@gmail.com

Tickets for A Midsummer Night’s Dream & 70th Anniversary Celebrations are on sale from the Civic Theatre, Chelmsford. Call the box office on 01245 606505, or visit https://www.chelmsford.gov.uk/theatres/whats-on/dance/a-midsummer-nights-dream/