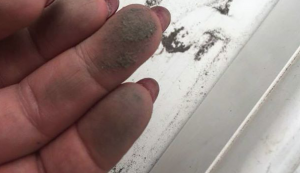 RESIDENTS in Tilbury are urging the council to act over potentially hazardous dust which has blanketed homes and risks causing long-term illnesses.

Concerns were first raised during a council meeting in November when Councillor Aaron Watkins, cabinet member for environment, said tests by the environment agency showed the dust was iron oxide and “does not pose a direct risk to health”.

But at a full council meeting on Wednesday night a petition was presented from residents with 750 signatures, urging the council to do more.

“I know this has been asked about before in this chamber but the council’s admission that this has iron oxide in it has caused alarm amongst residents and rightly so. I think it is only right the council does further tests on the dust itself to 100 per cent rule out health issues such a silicosis, and other iron oxide related illnesses.

“There is a real fear that foreign bodies are entering people’s lungs and people are breathing it through no fault of their own, just their locality.”

Speaking after the meeting, Councillor John Allen of the Tilbury St Chads ward, said: “If this has iron oxide in it then I’m sure that if you inhale it and take it into your lungs it won’t be good for you.

“This is going over everything the residents own. One gentleman I’ve spoken to said he washes his car and within 25 minutes to half an hour it is covered again. If it does that then I am sure people are taking it in their lungs and in close proximity is two schools, are the children who are out in the playground also breathing it in? Of course, they are.