On and off peak fares face the axe 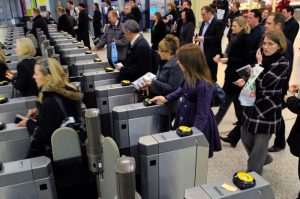 TRADITIONAL peak and off-peak rail fares face the axe under sweeping changes being proposed for the UK’s train ticketing system reports the BBC.

The Rail Delivery Group (RDG), which represents train operators, wants to eliminate the “cliff edge” between peak and off-peak prices.

It argues that this would reduce overcrowding.

Also, tap-in, tap-out rail fares could be expanded beyond London under the proposals published on Monday.

The RDG’s wish list of reforms is based on some 20,000 submissions on how the UK railways could be improved.

Feedback from commuters found eight out of 10 want the fares system overhauled and nine out of 10 want smart or electronic tickets, with the potential for price capping.

The Rail Delivery Group said reforms would support tap-in, tap-out fares – a pay-as-you-go method used in London – and more integration with other modes of transport.

In London, tube and rail commuters can use contactless bank cards to automatically pay fares which are calculated based on where a passenger enters and exits the network.

Reform would mean updating regulations around peak and off-peak travel, the RDG said, and ticket prices could be set more flexibly. This would reduce overcrowding, it said.

“Rail companies are already working together on plans for real world trials so people can see what our proposals could mean for them,” he said.

Rail companies needed the government to change rules on how train fares were charged, he added.

“Current regulation needs to be updated and we want to work with government, which is key to making improvements a reality, to deliver the better fares system the public wants to see.”

The government is currently undertaking the Rail Review which is covering everything from commercial contracts to rail fare structures. Its consultation closes at the end of May.

Darren Shirley, chief executive of the Campaign for Better Transport, said the existing system was “broken and desperately needs fixing”.

“What’s not clear however, is if these proposals will also lead to an end to the annual fares rise, which fails to reflect the level of service passengers receive the previous year.

“It is now up to the government to take forward these proposals to ensure we have a fares system that is fairer and easier to use.”
Another proposal is to stop passengers having to buy split tickets to get the cheapest fares for some journeys.