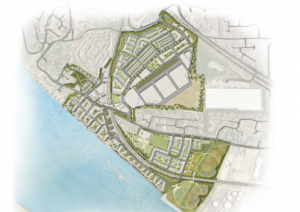 The massive redevelopment project will come at a cost of £1billion and see the creation of thousands of new homes, retail space, hotels, two new schools and a film and television studio.

Next week, it will go before Thurrock Council’s planning committee where councillors are expected to grant outline planning permission.

If the scheme gains support from the council, it will allow applicant Purfleet Centre Regeneration Limited to begin drawing up more detailed plans which will include up to 2,850 new homes, at least 285 of which will be “affordable”.

The largest concentrations of homes will be built on land to the north of the former Botany Quarry, with 1,200, and to the west of Cory’s Wharf, where there will be 1,045.

The housing will be supported with significant infrastructure developments, including a new primary school to cater for an estimated 540 new pupils, and the new Harris Riverside Academy school that will have a capacity of 1,150 students, including 250 sixth form pupils.

The existing train station facilities will also be upgraded, road connections improved and a new medical centre will be built.

Planning documents note that the redevelopment of the town could lead to the loss of up to 400 jobs but this will be offset by the creation of another 2,800 by 2026.

New film and television studios are also expected to be major employer, taking up 135,000 square metres and comprising of production and post-production facilities, as well as a backlot area that could have filming taking place 24 hours a day, seven days a week.

A report from the council’s planning team recommends that members of the planning committee approve the plans because they contribute to “housing and economic growth objectives” and have the potential to create thousands of new jobs.

The planning Committee meeting will be held at 7pm on April 25.

One of the most unique aspects of the regeneration plans is the film and television studios, which will be a boost to the creative industries and create a wide range of jobs.

Set across 135,000 square metres – the equivalent of almost 20 football pitches – the studios will be between eight and 10 storeys high and located on the southern part of the Botany Quarry, close to the railway station.

As well as generating jobs and bringing the entertainment industry to the borough, the studios are expected to support the town centre by attracting tourists, studio employees and visiting audiences.

The plans also call for a panoramic TV studio, which uses the town as a backdrop and promotional events for productions could be held in the town centre.

Planning documents state: “The studios will undoubtedly raise the profile of the area and offer benefits such as jobs and vitality. The chosen location is one that will benefit the studio, the surrounding creative industries, the development as a whole and significantly the local community.”