AN alliance between the Thurrock Independents and a rival party has been ruled out, with the leader of the party claiming it would “betray” voters. 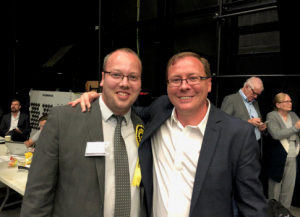 None of the political parties were able to win enough votes to secure a majority during last week’s elections but with Labour holding 17 of the 49 seats and the Thurrock Independents holding nine, it would be possible for the rival parties to join forces and attempt to create a new administration.

But the leader of the Thurrock Independents has ruled this possibility out and has instead demanded that the council introduces a committee system that would mean decision making by committees that are made up of councillors in proportion to the number of seats held by each party.

“To do so would betray the residents who supported us during the elections. We’re not interested in back room deals in exchange for a few extra councillor allowances. We’re here to build a party which will fundamentally change the way Thurrock Council operates.

“We favour an immediate move to the committee system. The three groups received roughly equal shares of the popular vote – Thurrock Independents got 29.3 per cent, Labour 31.9 per cent and Conservatives 32 per cent. We also have an independent with a huge mandate from East Tilbury.

“The committee system will allow the views of all Thurrock residents to have influence on how Thurrock is governed. Within the current system a Conservative or Labour administration would represent just a third of votes cast during the election.

“Given these facts the only democratic outcome possible is for party differences to be put aside and for all parties and independents to work collaboratively and collectively together within a committee system.”

The Thurrock Independents and Labour have taken the same stance on many of the major issues within the borough including opposing the closure of Orsett Hospital and an extension to the council offices. Despite this, they two parties have rarely been able to unite over the issues which has often resulted in a war of words.

If the Conservatives remain in power, they are likely to continue running the council as a minority administration. After losing a seat in the elections, the party now holds 22 seats, three seats short of an overall majority.

Voter turnout hits lowest point in the past ten years

The number of residents that came out to vote in this year’s election hit rock bottom, with the council recording the lowest turn-out in more than a decade.

Council figures have revealed that just 26.8 per cent of the borough voted in the last week, topping the previous ten-year low of 27 per cent in 2012.

All other years since 2010 have been around 30 per cent or more.

The voting slump comes in the same year that many have been left disillusioned by politics due to the Conservatives’ failure to deliver Brexit.

Thurrock residents were major supporters of leaving the European Union and the vote saw 72.2 per cent voting to leave and a massive turnout of 72.7 per cent – topping all local elections and general elections since 2010.

Council leader Rob Gledhill admitted on Thursday night that he was almost always asked about Brexit and national politics first while on the campaign trail and had to get over that “hump” before discussing local politics.

Labour Councillor Victoria Holloway also said she had faced questions about Brexit but that it is “one of many issues” that were raised.

One Response to "Thurrock Independent leader rules out coalition"