EAST Thurrock United boss John Coventry has confirmed today that Sam Higgins will not be re-signing with the Rocks for the upcoming season.

John Coventry said: “Sam has done a lot of soul searching over the past couple of weeks. He has been torn between remaining loyal to us, or moving on to stay playing at least at National South level.” 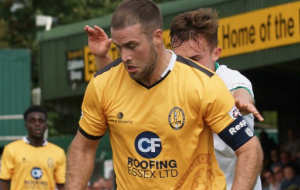 “We’ve had a long chat about the situation, and agreed that it’s very much in his best interests for him to move on to further his career”.

Higgo will obviously be greatly missed at Rookery Hill by fans and fellow players alike. People on the outside of the club are often misguided into thinking that Sam is all about goals, an easy mistake to make with a player who smashed all previous club goal scoring records in amassing 275 goals for the Rocks in competitive fixtures.

“We of course know that Higgo has so much more to his game. An all round quality footballer with an ability to pick out long range defence splitting passes, which over the years have led to countless goals for his colleagues.

“I’m quite happy to go on record as saying that Higgo has played a huge part the club’s successes in recent years, and I’m sure everyone at the club wishes him every success going forward.”