Justin Edinburgh: A tribute to a servant of football 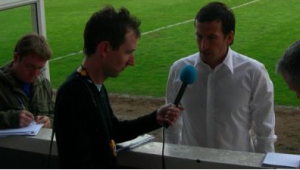 I COVERED Grays Athletic games, home and away, whilst Justin Edinburgh was manager. It was between 2007 and 2008 when I worked for the Thurrock Gazette.

I covered the games, home and away. From Morecambe to Torquay. The picture attached is on the last day away at Morecambe in the 2006-07 season when Grays survived relegation.

He was courteous. Before a game, he would stride across the pitch at Bridge Road, approach the bench and applaud the supporters.

He was a student of the game and would often talk in quite abstract terms about players “believing” and “faith” etc.

At the end of each game, he would speak to his players and then retreat to his office, consult with (Jimmy Dack, Gary Phillips) and then invite the press in. Again, his thoughts were considerate. He concentrated on what they had power to change and not the negatives.

I will always recall one very tricky period when after a defeat, it was touch and go whether he would be sacked.

Justin was very upset but upset in the way a proud man would be but who he invited us in he explained what he was going to do to solve the problem.

The next game was on a rainy Tuesday night in Halifax. The game was “live on Setanta” Grays Ath carved out a hard-earned goal-less draw. After the game it was just me and Justin. He wouldn’t be drawn on management issues but the game in hand.

Soon after, he left. A year later, we met again, when he was manager of Rushden and Diamonds and they were playing Grays Athetic. We shook hands and then he told me he wasn’t happy with some of things I had written at that time but respected that we were both in a tricky position. Again, he was straight, professional and understanding.

Justin Edinburgh was a great servant of football. A man who earned respect and will be sorely missed. For a season or so, he brought great pleasure to the fans of Grays Athletic. For that we thank him and our sympathies go to Justin’s family.