Thurrock Council already spent half a million on new offices (before any building work has been done!)

MORE than half a million pounds has been spent on a controversial plan to redevelop the council’s civic offices, before any building work has begun. 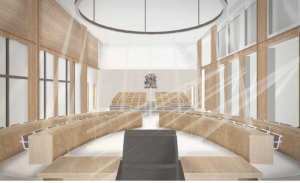 The spending has been detailed by the council after questions were raised about a report which said there has been “significant expenditure”, despite not having planning permission and failing to present a business case to justify the project.

The Local Democracy Reporting Service had to request the information from the council five times before it was eventually provided.

A spokesman for the council said: “The plans to extend our civic offices will enhance the customer experience, maximise civic and community use of the building, and set the tone for development in Grays including providing vibrant new housing on the current site.

“The development will feature new and enhanced public spaces including meeting rooms which the community can use, a new café and outdoor seating area open to the public and a new registrar’s garden for ceremonial use.

“Spending committed on the Civic Centre project so far is on architectural and surveying work. It is £70,580 on the development of concept designs and £440,300 on surveys and architectural work.

“The spend to date is all part of the £9.78million project budget, around £2.8million of this budget will be funded by income received from the sale of land freed up for housing development when the older part of the Civic Offices are demolished.

“The works are being funded by capital expenditure which has been set aside for a number of years. This money cannot be used for day-to-day running costs and therefore will not have any impact on the services Thurrock Council provides which are funded by the revenue budget.”

The council report also highlighted that if the plans to build the civic centre extension were abandoned it would require them to pay compensation to a company that has been employed by the council. The compensation amount is said to be “commercially sensitive”.

A motion calling for the plans to be abandoned will be discussed by councillors on Wednesday evening.