THE organisers of a new celebratory event this summer called The Tilbury Carnival, have unveiled five flags which have been created and inspired by stories about the Empire Windrush which arrived into The Port of Tilbury 71 years ago on 22nd June 1948.

The five flags, part of a set of thirty, have illustrations which are inspired by the story of the Windrush and were created by Kinetika in collaboration with local community members from a wide range of Tilbury organisations, including One Community Trust, Gateway Academy, and Kite Spirit textile group. 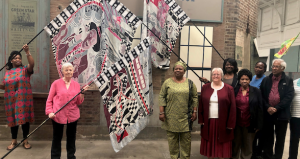 The five flags which were unveiled to coincide with Windrush Day, depict the journey and arrival of the Empire Windrush bringing the first group of Caribbean people to settle in the UK, including the famous calypsonian Lord Kitchener, known for his composition ‘London is The Place for Me’ that he performed from the deck of the ship on arrival at Tilbury.

Stuart Wallace, Chair of Tilbury on the Thames Trust (Carnival organisers) said: “We are proud of the part the Port of Tilbury played when the Empire Windrush arrived in our port 71 years ago. The five vibrant flags revealed this week are inspired by the Windrush stories and will form part of the Tilbury Carnival 2019 this summer. We are planning an exciting parade dancing its way through Tilbury so I hope everyone has the 20th July in their diary!”

Thurrock is proud of its connections with the Empire Windrush and a major celebration was held in 2018 to mark the 70th Anniversary of its arrival. The summer carnival is coming back to Tilbury on 20 July and will be inspired by the local heritage of the area and the role of Tilbury with the Empire Windrush, as well as drawing on the style of the Notting Hill carnival. The project will engage with the local schools and residents of Tilbury, in a programme of educational workshops.

Tilbury on the Thames Trust is managing the Carnival project, with Ali Pretty, Artistic Director of locally based and renowned arts organisation Kinetika leading on the artistic elements. There will be local dancers, giant puppet building and celebratory flags created specifically to tell the local stories.

TTT are also involved in a carnival exchange with Norwich, which is one of England’s oldest running carnival processions – the Lord Mayor’s Procession. The Windrush Day Fund has awarded £20,000 for the carnival, complementing the funding already secured which includes £10,000 from the Port of Tilbury, £5,000 from Thurrock Council and a crucial £30,000 from Arts Council England. For information on the carnival please go to: www.tilburycarnival.tott.org.uk